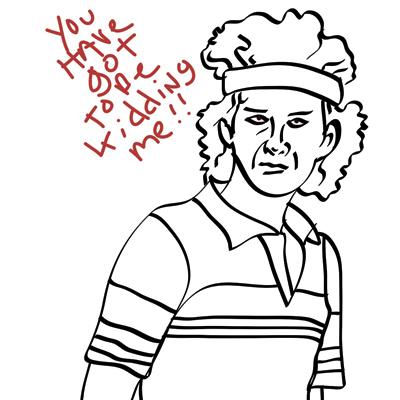 Clocking in at eight minutes and consisting of a mere four songs, this split EP is just a quick taste of what these raw pop-punk (emphasis on pop and punk) bands are capable of. Of course, at least one of these bands' full-lengths barely go longer than eight minutes (lookin' at you, Joyce Manor), so maybe it all makes sense.

California's Joyce Manor do their concise ragged power-punk thing here perfectly, opening this split with two excellent tunes (both punkier reintepretations of songs originally on 2012's more experimental Of All Things I Will Soon Grow Tired) that show the band's strengths: excellent songwriting and sweet melodies hidden under crashing, noisy production and a deceptively raw edge. Their opener, “Tame,” is shocking in its simple power: You've heard these chord changes before, but rarely delivered with so much urgency.

Meanwhile, Toys That Kill have the resume to prove they know their snotty, melodic punked-out pop (do the letters F, Y, and P mean anything to you?), and know it they do: Their two songs are also refreshingly short and powerful, the band nothing but pure lo-fi energy. Sure, it's punk, but (like Joyce Manor), the band are basically talking classic pop song structures and just adding a layer of grease to ’em.

For an eight-minute split, this one has a shocking amount of replay value to it. Or maybe it's because it's an eight-minute split release. Sometimes punk packs its best punch when it gets in, kicks ass (with a melody, mind you) and gets out. Every one of these four stars was earned with the obvious heart and soul these bands put into these songs.