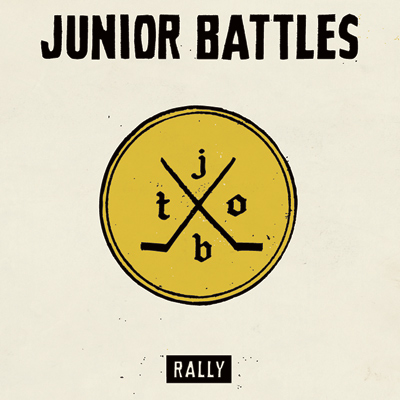 In the vein of similarly awesome melodic Canadian punk bands such as Attack In Black and the Weakerthans, Toronto’s Junior Battles have come into fine form on their second album, Rally. The strength is in the band’s no-bullshit approach to wearing their influences on their sleeves. You can tell there’s been many a late-night party with Jawbreaker and Bad Religion albums cranked on the communal stereo. Mid-album track “Every Town” is seeping with mid-era Mr. Brett-isms, “TPS Reports” is pure Blake Schwarzenbach worship and “Three Whole Years” is all countrified guitars and suped-up John K. Samson. But Rally doesn’t come across like a preconceived cookie-cutter job as a whole; instead it’s its own independent listen with the rambunctious energy that comes along with a band still absorbed in their infancy. “Assholes On Rollerblades” is pure, frantic pop-punk and one of the album’s many high points. “Believe It Or Not, George Isn’t At Home” has a sing-along, drunken punk sound that would slap a smile across everyone’s face at their local punk fest. Other tracks, such as the rock radio-friendly “Bunk,” with its understated melody and “whoa-oh” chorus, show Junior Battles might just have the longevity of the bands they are so obviously inspired by.