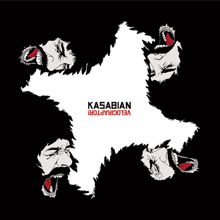 Kasabian have been topping charts and grabbing awards in their native England since their self-titled debut dropped in 2004, but they’ve also managed to snag a decent cult following among stateside Anglophiles along the way. The group’s new album, Velociraptor!, probably won’t change that dynamic. Produced by Dan The Automator, who helped catapult Gorillaz to worldwide fame in 2001, the disc doesn’t skimp on ambition. But unlike Gorillaz, Kasabian are content to follow rather than lead. From the lightly bruised psychedelia of “Let’s Just Roll Like We Used To” to the stomping yet orchestral dance-rock of the title track—which just begs for a mashup with the Ting Tings’ “That’s Not My Name”— Velociraptor! is an energetic, upbeat, gleeful pastiche of almost every form of English pop devised over the past four decades. If you’re gonna be a dinosaur, might as well be a fast one.