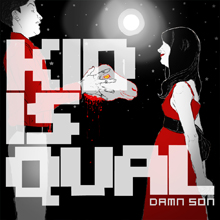 The debut EP from Kid Is Qual, the post-Jack’s Mannequin project for bassist Jonathan “Dr. J” Sullivan, is about as far from his former band as it gets. For starters, there’s nary a guitar to be found on Damn Son; instead, two basses, drums and an array of bells and whistles—from analog effects pedals to a vocal-distorting talk box—collide to create fuzzed-out, static-filled tunes in the vein of Devo, Trans Am and the Faint. The whirling title track sounds like the latter playing 8-bit Nintendo; the rumbling “Me Gu” features screeching-brakes squalls, a corrugated low-end and über-robotic vocals; and Virginia rapper Trew adds a ferocious bridge to “You’re A Crumb, I’m Ole.” Other songs aren’t quite as successful: Despite a funky foundation and some nice percussive texture, “Motel, No Tell” feels unfocused, while “Qual Is Qual” relies on distorted bass squeals and vocal tricks to hide its flimsy structure. And it’s easy to hear how Damn Son might rub listeners the wrong way—in fact, your tolerance of Sullivan’s digitally smudged vocal delivery (which is a cross between obvious Auto-Tune and a robotic alien) will probably dictate how much you like the EP. Still, these six songs are carefree and fun, and it’s refreshing to hear a collection indebted to so many permutations of rock—dance, electro, stoner, synth and metallic—but yet not beholden to any genre limitations.