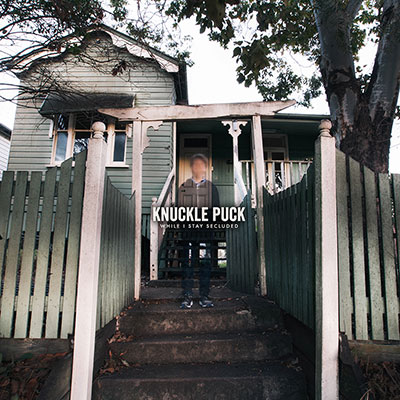 While I Stay Secluded EP

Chicago’s Knuckle Puck may be a bunch of youngins who seem dead-set on just releasing EP after EP, but they’re doing something right, as the six songs on this latest (you guessed it) EP prove. The band haven’t become one of the most respected bands of the pop-punk revival for nothing, and while some may grumble about another short disc instead of a full-length, there’s plenty to be happy about here.

Opener “Transparency” proves that these guys can stand toe to toe with the likes of the Wonder Years or Man Overboard immediately, as the bouncy, emo-inflected pop-punk is catchy, solid, and moving. It’s followed up with a tempo boost in the form of “Oak Street,” which kicks up the BPMs for the verse while the chorus goes half-time and vocalist Joe Taylor shows a love for Rise Against in his scratchy yet melodic vocals. It’s a good tune, and between those two tracks, the band show they can handle whatever strain of pop-punk they want to. The chunky grooves of “Bedford Falls,” complemented nicely by the thick production, are a nice touch.

However, it's “But Why Would You Care?” that is the EP’s shining moment, and it shows much promise for the band’s future: Here they combine moodiness, varying tempos and a genuinely moving sound, with great results. Honestly, it makes their more standard pop-punk material sound positively dull. Hopefully, when they decide the time is finally right for a full-length, they stretch out in this direction even more.

“But Why Would You Care?”