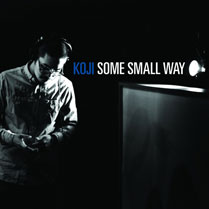 With a plethora of EPs and splits under his belt, Pennsylvania native Andrew “Koji” Shiraki’s latest release is an intimate, organic collection that is gorgeous in its simplicity. Each of the five songs on Some Small Way convey the feeling that they literally came together on the spur of the moment, captured on tape before they had the chance to mutate into something else, the lyrical tone evoking the nostalgic feel of Texas Is The Reason or Angel Youth-era Last Days Of April while simultaneously infused with a potent urgency.

The twanging riffs of “Eating Lemons” are evocative of early Interpol, and it surges as if alive as its vocal harmonies intertwine and soar, while the edginess and hints of desperation behind “Waking Up” and “Color Quiet Island” bleed through the sweeping melodies that lift them into the stratosphere. Best here, though, are the frail “Windows” and “Stay.” The former is a delicate acoustic lament captured live before a small audience, his voice brittle and bold all at the same time, and it’s beautiful, tapping into the same poignancy Elliott Smith conjured at his best. Sonically, “Stay” is at the other end of the spectrum, driven by an insistent rhythm and shot through with discordant—and at moments almost dissonant—guitar, but it wields a sublime grace that is spellbinding. As you sink into the song, the plaintive refrain of “You know who you are” feels like it enters your body through the base of your lungs rather than your ears, its warmth creeping up through your chest and encircling your heart, holding it gently as the remainder of the track unfolds.

There are so many reasons to fall in love with the five songs on Some Small Way, and after just one exposure you’ll be hard-pressed to find any to walk away.