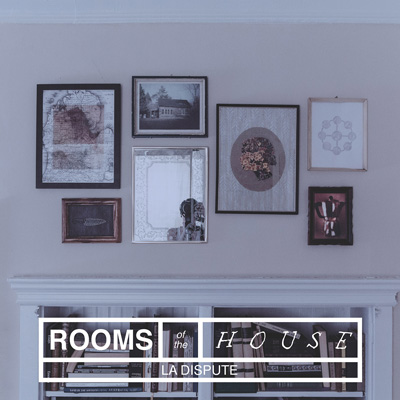 Rooms Of The House

Maturation is a weird word. Plenty of artists playing decidedly immature music throw it around to make their newest compositions seem weightier, when in reality, they’re no different than the material they’ve been cranking out for years. La Dispute are different. One listen to their third full-length, the Will Yip-produced Rooms Of The House, and it’s clear they’ve continued to mature as songwriters and musicians since 2011’s incredible (and incredibly dense) Wildlife. Their early work—engaging in its own right—is almost laughable compared to how expertly these 11 songs have been crafted.

The best skill La Dispute have learned since their 2006 debut is how to self-edit. Rooms comes in at a relatively compact 41:41—just enough for a single LP, whereas their past two full-lengths have spanned four sides of vinyl each. The arrangements are tighter and more pointed, without losing any of frontman Jordan Dreyer’s lyrical laser focus. While La Dispute’s earlier material could easily be classified as traditional-screamo revival and Wildlife certainly took steps toward prog-rock and post-punk, Rooms is an amalgamation of all of the above and then some. “For Mayor In Splitsville,” the most conventionally structured song of the bunch, could be the band’s unique interpretation of the Hold Steady’s working-man’s bar-rock, were it not for Dreyer’s brutally heavy lyrics about a collapsing marriage. “HUDSONVILLE MI 1956” carries a strong sense of foreboding, with instruments deliberately cutting in and out, as Dreyer urges the listener to “stay calm.” “Woman (in mirror)” is a surprisingly straightforward, mellow ballad about going through “the motions of ordinary love” that could’ve come off the Van Pelt’s Sultans Of Sentiment (a reference none of you get but all of you should investigate), with hints of Radiohead and Modest Mouse sprinkled throughout.

Rooms Of The House is a success on all levels, but what puts it over the top of the rest of the band’s catalog is how effortlessly the album flows from track to track, adjusting for different moods as the stories Dreyer shares tap into a wide spectrum of feelings, from fear of the unknown (“First Reactions After Falling Through The Ice”) to coming to grips with your failures (“SCENES FROM HIGHWAYS 1981-2009”) to pure emotional exhaustion (“Objects In Space”). Considering he writes from a fictionalized perspective in a scene where the more honest you are about yourself and your shortcomings, the more people love your band (see: Touché Amoré), it’s incredible just how good Dreyer is at making you connect with his characters, and how equally good his band are at backing him up. There’s no question La Dispute are something special. Let’s not take them for granted.

“For Mayor In Splitsville”