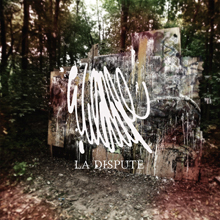 This review originally ran in AP 280.

A lot has changed in the three years since La Dispute released their debut full-length, Somewhere At The Bottom Of The River Between Vega And Altair. The Michigan quintet have found themselves at the forefront of a traditional-screamo revival no one could have predicted, and with that comes a significant amount of attention and pressure for a follow-up. Split EPs with Koji and Touché Amoré did little to tip the band’s hand, with the former being surprisingly mellow and the latter being the most aggressive entry in the band’s catalog. Wildlife is an expert balancing act between these two sides of La Dispute’s personality. On one hand, you have churning post-hardcore driven by Jordan Dreyer’s percussive vocals (“Harder Harmonies”) and straightforward aggressive rock à la Small Brown Bike (“Edit Your Hometown”). Conversely, more than a few tracks distinctly conjure up modern-day Radiohead (the acoustic stomp of “A Broken Jar,” the jazzy, fragile first half of “Safer In The Forest/Love Song For Poor Michigan”). The unifying thread is Dreyer’s incredible knack for storytelling; the album’s centerpiece, the seven-minute “King Park,” is a jaw-dropping retelling of witnessing a shooting and the event’s aftermath. The song is grisly and haunting, and results in the most intense musical crescendo of the band’s career.