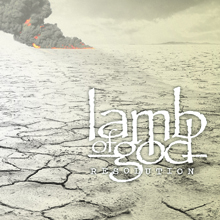 With 2009’s Wrath, Lamb Of God made a point of moving away from the more polished sounds of their mega-selling predecessor, 2006’s Sacrament. In doing so, the Virginian quintet set out to prove that they were still a metal band through and through, and while the record achieved this, it didn’t offer much in the way of variety or innovation. With Resolution, the band not only further stake their claim as belonging among the genre’s heavy hitters, but they have delivered perhaps their quintessential album, encompassing elements recognizable from every stage of their career while also proving that there are dimensions to their sound as yet unexplored.

The record opens with perhaps the heaviest track they’ve put their name to, the sludgy “Straight For The Sun,” which demands your attention from the start. LOG deliver streamlined metal anti-anthems by the fistful: The simplistic titles of “Desolation,” “Cheated” and “Guilty” are well-matched to the single-minded attack driving them, though the songs’ more technically intricate structures make them much more than your average mosh-starter. The band are at their most involving when they evoke a more sinister tone, though, such as “The Number Six” and “Terminally Unique.” The closest LOG come to revisiting Sacrament territory, these two tracks are imbued with a sweeping, epic tone that sees the band kicking at the limits of their sound without compromising on aggression. However, they make their boldest statement with the six-and-a-half-minute closing track “King Me” drenched in eeriness and emboldened by strings and a female operatic vocal that counterpoints the sandblasted roar of Randy Blythe. That they manage to do this and retain their distinctive sound is impressive to say the least, and the song’s potent drama provides a fitting finish to the album.

On the strength of these songs, it is conceivable that Resolution may be the first in a series of more progressively oriented releases from Lamb Of God—a tantalizing prospect. Regardless, it is a solid, exciting and ambitious album that proves is still a lot of mileage left in the band.