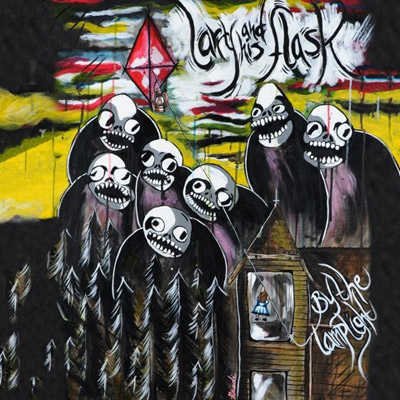 Larry And His Flask

Upon exposure to By The Lamplight, it isn’t hard to grasp why many—including Frank Turner—have been singing the praises of Larry And His Flask of late. Difficult to pigeonhole, the Redmond, Oregon, sextet draw on a wide range of traditional styles and influences to create an organic, unforced mishmash that is rich with nostalgia though fresh feeling. Alongside the guitars and drums, they utilize upright bass, banjo and trombone, each instrument given the space to shine, all of this presided over by Ian Cook, whose crooning melodies lovingly recall Smoking Popes at their best.

At their most rampant they are irresistible. Following the barbershop vocals that introduce “Pandemonium” they open up into pure boisterousness, the banjo charging all over the song. They up the energy stakes further with “The Battle For Clear Sight,” but nowhere are they more rousing than on the delirious “Home Of The Slave,” which sounds like it should soundtrack some kind of screwball chase scene in a prohibition-era set movie. This playful liveliness recalls that of Gogol Bordello, and in fact there are many comparisons that could be made with the gypsy punks, all of them complimentary. However, they are no one-trick pony, and the record shifts through a variety of flavors and moods. The off-kilter staggering of “Barleywine Bump” teeters on the edge of discordance while still catchy, as does “Cruel Twist Of Fate,” and there is something hostile to both tracks, making them riveting. They are also affecting at their most restrained, and “Gone From You” and “All That We’ve Seen” strip things back to acoustic guitar and Cook’s vocal, a beautiful melancholy suffusing them, making for a dynamic counterpoint to the more rough and ready tracks.

While some may write Larry And His Flask off because on paper they sound like a hipster’s wet dream, it would be foolish to do so without at least experiencing the sounds of By The Lamplight. There is so much verve and spirit on display, not to mention clever songwriting, which sees them weave moving, intriguing and entertaining stories through their heartfelt music. And if they are half as exciting live as they are on record, Larry And His Flask are a special entity indeed.

“Home Of The Slave”