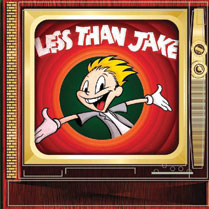 Less Than Jake have never been accused of taking themselves too seriously, so when news broke that the band would be releasing a covers EP full of TV show themes and commercial jingles, surprise was scant. With TV/EP, LTJ cranks out 16 covers in roughly 14 minutes, running the gamut from fairly new (the iCarly theme) all the way back to the 1970s (the Laverne & Shirley theme). In between, the group intersperse commercial jingles, and while it's all executed with the precision and aplomb one would expect from a band who have been around for 18 years, it's easy to wonder whether or not anyone was actually clamoring for a release of this nature over, say, an EP of new, original material (even if the hardcore tinges the band add to the McDonald’s Big Mac jingle are very amusing). Anyone wishing to reminisce about the golden age that was the third wave of ska-punk will find plenty to like, though, as by its very nature, TV/EP sounds like something straight outta ’97.