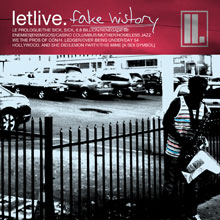 Imagine every single emotion you’ve ever felt since you were born coursing through your body at the same time—all the rage and fear and sadness and love and uncertainty and joy and everything else in between bubbling through your blood in an overwhelming concoction of feeling that just can’t be contained within your skin. That is what letlive.’s new album sounds like, and not just the first time you hear it either. It sounds like that every time.

Originally released last year, Fake History now comes with three bonus tracks, making it even more potent than it was to begin with. The album’s already at boiling point when it begins, with the flailing, unhinged and short-lived introduction of “Le Prologue” which sounds like the ghosts of At The Drive-In and Refused battling to the death. Similarly, “The Sick, Sick, 6.8 Billion,” “Muther” and “H. Ledger” bristle with a hostile, visceral and vitriolic energy, yet one that’s as cerebral as it is feral, and as melodic as it is cacophonous.

As powerful as the music is—and its strength is undeniable, as every muscle practically spasms in reaction to the desperate guttural screams that emanate from singer Jason Butler’s mouth and to the violent and complex post-hardcore melodies produced by his four bandmates—as much weight is carried in the erudite, intelligent lyrics and themes that permeate these 14 songs. From the personal to the universal, from songs about infidelity to humankind’s abject willingness to not think for themselves, this L.A. band present a vision of the world detached from the doctrines and the bullshit and mumbo jumbo that now seem to define the 21st century. Instead, with Fake History, they’ve created an incredibly powerful alternative to everything that society deems to be important, aiming to destroy those fake values through sheer, brutal, emotional force. It doesn’t necessarily have the answers, and nor does it purport to, but it makes you want to search them out—even if it takes a lifetime to do so—and change the way you live your life, if not the world around you. And that’s as much as music could ever hope or wish or strive to do.