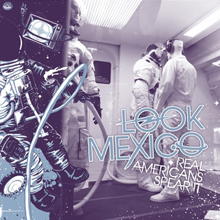 This review originally ran in AP 280.

Had Vin Diesel & Co. not put out Fast Five earlier this year, we may have never heard new Look Mexico songs. Once again taking song titles from quotes in Diesel flicks, these noodly indie rockers (now based in Austin, Texas) explore a few more corners of their sound on the 14-minute, five-track Real Americans Spear It. Opener “You Hungry? Good. ‘Cause You’re Sayin’ Grace” is an admirable attempt at Vampire Weekend-esque world pop, only with more effects pedals. “Arrest? I Don’t Feel Like I’m Under Arrest” is as straightforward a pop song as this band have ever written, with an instantly memorable chorus. “Running Ain’t Freedom (You Should Know That)” is the best of the bunch, though, with tambourine and piano flourishes perfectly accenting the driving rock song.

“Running Ain’t Freedom (You Should Know That)”