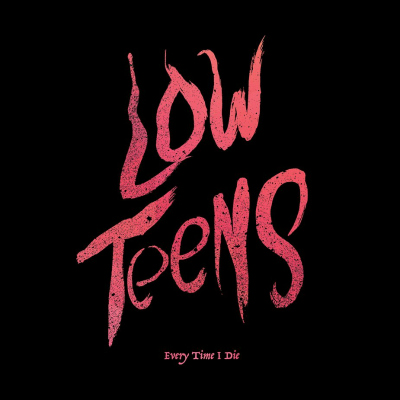 It’s been 15 years since Every Time I Die dropped their debut full-length album, and a decade and a half later the heavy hitters haven’t lost an inkling of steam. Their eighth studio record, Low Teens, might not start off with guns blazing, but it does ring out as a classic Every Time I Die release if ever there was one.

Opening with “Fear and Trembling,” the record slowly rolls forth with a guitar riff that’s scattered and unsure. Instrumentally, it’s like that shaky stagger stop you make as you approach your first stop sign during a driver’s test. And yet, for some reason, this off-kilter start resonates as one of the most well-played moments on the record—and that’s just the beginning.

Fans are guaranteed to see every aspect to frontman Keith Buckley’s vocals in Low Teens, from the heavily charged single “Glitches” and the anger-driven roars on “Awful Lot” to the more grungy, melodic vocals of “C++ (Love Will Get You Killed).” Having previously worked with members of Fall Out Boy and My Chemical Romance, ETID complete the emo trifecta when Panic! At The Disco’s Brendon Urie rears his voice on the record’s pivotal track, “It Remembers.” The melding of Buckley and Urie’s vocals is arguably the highlight of the album, as their ranges complement each other so well, it’s almost difficult to differentiate the two.

And while ETID may be a poster child for metalcore, Low Teens, as with most of their discography, easily transitions into far more diverse approaches and genres. “I want oblivion all the time,” Buckley states in the great stoner-rock tradition on “It Remembers,” making the track more sonically suitable for a dive bar than a metal record. This dingy dive vibe appears again on “Two Summers,” a reminiscent callback to tracks such as “Wanderlust” from 2009’s New Junk Aesthetic, A gesture that suggests keeping on par with what you’ve done in the past really can be the best road to success.

As Buckley is a published author and has contributed writing for the likes of Comedy Central, it’s no surprise that the lyrical depth of this album is worth looking into. While lines like “I’m joining a cult/joining a cult/joining a cult,” (“I Didn’t Want To Join Your Stupid Cult Anyway”) may feel a little tired and campy, lines like “I’ll be waiting with a suitcase when the devil comes for me,” (“1977”) and “Hell is not a myth/We spend each winter there/No one can prepare,” (“Map Change”) easily overshadow any lackluster lyricism on earlier tracks.

There’s an element of maturity toward the latter half of the record that balances out the more amped-up, “fuck it” attitude of the first half. “Religion Of Speed” rings out toward the end like an anthem on the brink of exasperation, its catchy yet punchy vocals mapped out over instrumentals that are seemingly  a little too sophisticated for the vocal style. In other words, it’s quintessential ETID.

Every Time I Die do not disappoint, which is why they have been around for so long. Low Teens perfectly captures the history of the band into one solid release. If you’re looking for something new or completely groundbreaking, you won’t find it here. You will find an incredible album that grows with every listen and reflects the extensive range of heavy music this band have consistently delivered in their furious career.