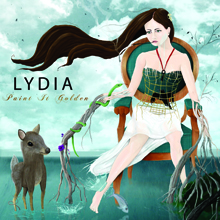 Reunions are such the rage these days that bands barely even really break up—they just go away for a little while. Such is the case with Lydia. Arizona's most wistful indie pop-rockers called it a day last year, issuing one final installment of their dreamy, heartfelt compositions on an EP called Assailants and embarking on one final tour for their cult of beloved fans. But when a series of tweets from frontman Leighton Antelman and producer Matt Malpass dropped hints of something brewing this past year, you think fans could care how quickly Lydia had been resuscitated? Of course not.

The result, Paint It Golden is the band's first proper full-length since 2008's …Illuminate, and their first long-player void of coed vocals (…Illuminate featured adored pianist/vocalist Mindy White, while 2005's This December; It's One More And I'm Free included pianist/vocalist Maria Sais De Sicilia). At this point, Lydia are essentially just Antelman and drummer Craig Taylor, but thanks to their pairing with Malpass, the duo manage their most lush and layered songs to date.

Paint It Golden shouldn't jar longtime fans by any means, though, as the act continue to sound like the best possible thing that could result from Copeland fornicating with the softest moments of Jimmy Eat World's Clarity. Despite the absence of a feminine presence, this is paint-by-numbers Lydia—which is both great and occasionally tedious. None of the tracks have the cathartic, heart-wrenching dynamism of past cuts like “We Clean Up So Well” (Assailants) and “Hospital” (…Illuminate), though the bright, glowing chorus of “Dragging Your Feet In The Mud” comes close. Instead, the pair tend to stick to a consistent thrust of heavenly melodies and icy force through tracks such as “Get It Right” and “I'll Bite You.” All along, Antelman swears softly and consistently like a 25-year-old Mike Kinsella (“You saw right through my bullshit”) and otherwise constructs graphic scenarios like a 20-year-old Chris Conley (“They bled out my organs”).

Paint It Golden makes it clear that Lydia had plenty of good ideas left, and their initial breakup was probably in haste. Though their inherent focus has transitioned to sparkly, melodic ambience, their first post-reunion work is a solid addition to their catalog.