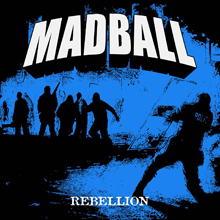 One of the nicest things about Madball is they will always sound like you expect them to sound—tough-guy hardcore, all the way. Like a favorite blanket (albeit one decorated with big dudes brandishing even bigger muscles), these guys are always there to comfort us with their windmill-inducing breakdowns and over-the-top gang vocals. To further prove the theory that Madball will never, ever abandon their roots, this new EP features two re-recorded songs from the band’s debut EP, 1989’s Ball Of Destruction. “Get Out” and “It’s My Life” are short bursts of hardcore, sounding better than ever. In fact, this whole EP sounds supercharged, perhaps due to death-metal producer Erik Rutan (Morbid Angel, Hate Eternal) being at the helm. The four new songs are raging, mid-tempo hardcore beatdowns, not unlike material on the band’s previous album, 2010’s impressive Empire. Of the four newbies, “You Reap What You Sow” is the strongest, with its clever back-and-forth chorus, but, really, this is Madball, and most of their songs could be randomly interchanged and only the band would probably notice. Reliable, one-dimensional, kick-ass.

“You Reap What You Sow”