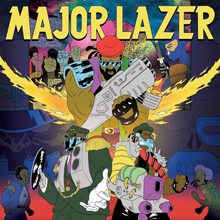 Whether remixing Beyonce, re-imagining Gwen Stefani and No Doubt, or receiving a recent Grammy nomination for Best Producer, Philadelphia-based boardman Diplo has become the mainstream‘s latest EDM success story. So it makes sense to view Free The Universe, the second full-length from his Major Lazer project, as a necessary outlet for his more outre impulses. The deliberately eclectic guest list insures this is a more wide-ranging offering than the Jamaican-heavy 2009 debut Guns Don’t Kill People…Lazers Do. That’s not an automatic endorsement of diversity, however. Diplo is still at his best when he’s highlighting the links between the digital rough edges of ’80s dancehall and today’s sound effects-heavy dance music. And when he stays close to his island source material, whether that means teaming with veteran Jamaican vocalists like Elephant Man (“Wind Up“) or British dubstepper Flux Pavillion (who helps him turn Johnny Osborne’s towering roots classic “Mr. Marshall“ into the bass-dropping showcase “Jah No Partial”), the results are guaranteed floor-fillers. When Diplo & Co. go outside those friendly confines, things get complicated. The collaborations with Vampire Weekend’s Ezra Koenig and Dirty Projectors’ Amber Coffman produce watery reggae suitable only for indie fans. Meanwhile, “Reach For The Stars” is exactly the sort of self-conscious Bob Marley-lite you’d expect from a pairing with Wyclef Jean, and “Bubble Butt” is a throwaway teamup with Bruno Mars that sounds like it took less time to write than to perform. Those gestures aside, there’s enough inventive, Jamaican-inspired music on Free The Universe to make it worth hearing — but here’s hoping Diplo keeps things Kingston-centric again next time around.