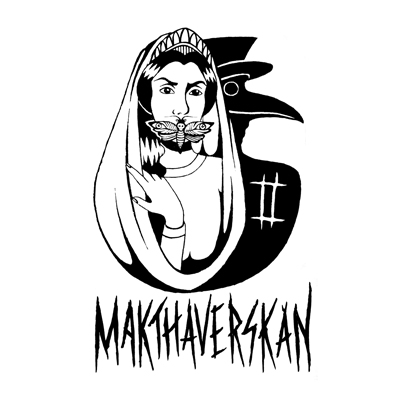 Having introduced their post-punk-meets-dream-pop with 2009’s eponymous full-length, Makthaverskan’s influences were clearly entrenched in early British punk and shoegaze. With a sparse, somewhat rough sound, the Swedish quintet veered between iciness and warmth in an intriguing manner, and though it was a good record, too often their reverence for Buzzcocks and the Only Ones diminished a sense of uniqueness. Returning five years later with II, Makthaverskan retain the elements that made them compelling, married to far better songwriting and greater emotional depth, making for an understated, engaging and often sublime collection.

“Antabus” opens the album, its simple, repetitive melody and Maja Milner’s captivating wailing marrying adrenaline and ethereality in a near-perfect ratio; while simplicity reigns, each of the nine tracks has its own character. The shimmering, New Order-meets-early James indie bounce of “Asleep” is pure sunshine, the sleepy rock ’n” roll of “Dromland” a gorgeous dirge, while the heart-on-sleeve, teenage longing of “Something More” captures the simultaneous pain and beauty of young love in a manner that may well break the hearts of every singer/songwriter that ever picked up a guitar. Every melody brings with it a sense of familiarity, though rarely to the detriment of the songs, more likely evoking nostalgia than a sense of plundering of the past.

In the album’s later tracks the band flirt more blatantly with the discordance that lurks in the background throughout, adding an underlying sinister tone to “No Mercy” and the quasi-hardcore of “Distance.” On first listen this can be almost a disappointment, since wanting to hear more in the same, upbeat vein of the preceding songs is natural. But with repeated exposure it becomes clear that these songs belong together, adding an extra dimension to the record, and those who to succumb to its charms could ask for nothing more.