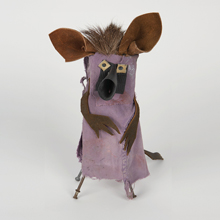 Philadelphia sideshow punks Man Man have reached a newfound crispness with the production guidance of Bright Eyes’ Mike Mogis on their fourth album, Life Fantastic. All over the release, the band’s unique formula of organ, dusty brass, xylophone and singer Honus Honus’ one-of-a-kind rasp has been bolstered by the synthesizer trickery that appeared on 2008’s Rabbit Habits half-song spaz “El Azteca.” But don’t think that this stew any less instrumentally varied—old-timey instrumental interludes on “Oh, La Brea” that might have passed as chintzy soundtrack fare before have become robust, and the swelling orchestral touches on “Steak Knives” cut as sharp as Honus’ lyrical intensity: “My blood runs quick like ink from a squid.”

Sadly, Man Man’s high-flying live experience generally features virtually none of these more heartfelt moments; instead, hearty pirate anthems such as “Knuckle Down” rule supreme. Good thing that “Knuckle Down” is one of the throatiest bangers of the band’s career, buoyed by a satisfying crunch of horns, thudding percussion, and a wild call-and-response. Being in Mogis’ capable hands might have been the only thing that made the delicate balance of castanets and luau-guitar in “Pirahnas Club” possible for these instrument-smashing warriors. Fitting this much bleakness in a basket of glee doesn’t sound easy.