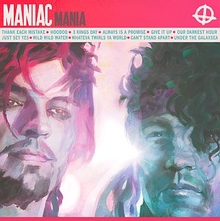 One part Wham!, one part Prince and a whole lot of pop-tastic inhibition are the main ingredients in Mania, the full-length debut from Maniac, the brainchild of former Matches frontman Shawn Harris and Something With Numbers vocalist/guitarist Jake Grigg. The album is packed with everything from crisscrossing vocals, bloops and beeps and orchestral strings to hand drums and harmonica that it’s kind of remarkable when you first learn Harris and Grigg played and recorded everything themselves, with a little help from producer Matt Radosevich (Dredg, Audrye Sessions). Maniac boldly announce their arrival with the intro to “Thank Each Mistake”—a booming timpani-and-brass pairing that rolls into a tip-toeing verse before building into a call-to-arms march chorus. The tempo never stays in one place for long, bouncing between smooth adult-contempo (“3 Kings Day”), straight-up ’80s dance (“Give It Up”), classic rock (“Whatever Twirls Ya World”), ballads (“Can’t Stand Apart”) and catchy, orchestral numbers (“Under The GalaxSEA”). But when you hear the pure jubilance that emanates from nearly every track, you know you’re listening to a band truly inspired and excited to be experimenting with music in a new format, having forgone the label-sponsored route of their former bands to focus entirely on music, art and the new DIY ethic. It’s precisely this joy in creating buried just beneath the surface of the songs that ties the album together, allowing so many different musical sounds to blend cohesively in the name of creating a smart, catchy as hell pop album.