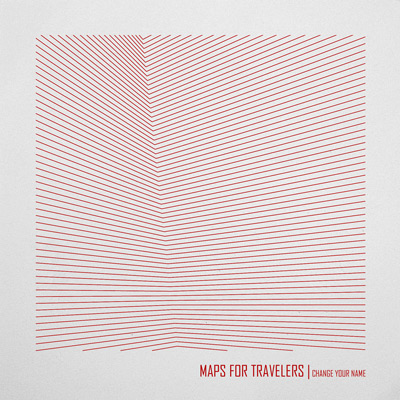 When Sunny Day Real Estate and Texas Is The Reason began to make waves in the mid-1990s, the intersections crossing the respective underground emo and alternative radio scenes started to look far bolder than previously thought. (Hell, just compare TITR's “The Day's Refrain” to Gin Blossoms' “Til I Hear It From You.”) Kansas City, Missouri's Maps For Travelers seem acutely aware of the musical rewards that can be reaped from inhabiting that border, with Change Your Name cribbing notes by bands from across the spectrum that's developed since then.

Maps For Travelers play a heavy and admittedly dynamic take on good, smart rock that seems to reside in those unique margins. There's a ton of respectable, quasi-arty influences in here, the strongest being Far and Quicksand, with subtle echoes of Thrice and Brand New wiggling around as well (which prevents the band from being easily compartmentalized with the current ’90s revival movement). They craft a pleasing tone, but their glaring issue is cohesion and flow. Their transitions occasionally feel erratic and mildly shoehorned, often with abrupt shifts into full-throttle screaming and heavier chugging. Remember early-2000s “screamo” and how widely the results varied? They vary for Maps For Travelers, as well—they howl with unnatural, throat-shredding aggression on the verses of “Get A New Face” over cheesy squiggles, and the sneering of “Figures In White” feels relatively ineffectual, acting as uncomfortable reminders of that era's stiffer moments (think Vendetta Red's “Stay Home”).

But for all the questionable songwriting decisions, the band still sound tight, and they offer a few parts worth the investment in Change Your Name. Vocalist/guitarist Zach Brotherton uses some rare but well-delivered falsetto towards the beginning of “Swoon” during a Mew-ish sidestep, and “World On A Wire” jumps out at the halfway mark with an effortlessly driving, hook-laden take on the “grass is greener” trope. “All Your Friends” is dark, anxious, and slowly strummed, greatly in the vein of would-be contemporaries Ghost Thrower's “It's The Way You Play The Game.” Even the bridge of “Figures In White” follows its song's forced onslaught with a haunting, trumpet-lent atmosphere before ending with a more properly built, Dustin Kensrue-like growling finish.

When a band draw from the raw, unbridled intensity of basement-bred emo and filter it through hard-charging, heavy rock, good things can happen. On Change Your Name, there are some good things happening, but with tinkering, Maps For Travelers can likely make consistently great things happen.

“World On A Wire”