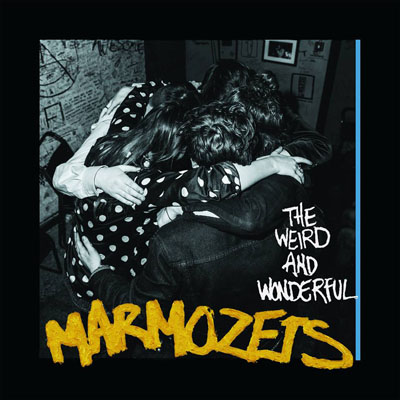 The Weird And Wonderful Marmozets

This writer has never been to the British town of Bingley, but it’s got to be in the upper reaches in the list of Most Patently Boring Places On Earth. This writer predicates that opinion solely upon the sheer aesthetic power of the debut album by Bingley residents Marmozets. You would need massive amounts of time on your hands in order to write, refine and record a debut album as thrilling as The Weird And Wonderful Marmozets. Modern technology and playlist culture have ensured that anything goes and the concept of “the guilty pleasure” is nothing to get hung up on. That’s why Marmozets’ hybrid of pop smarts, high musicianship, noise theory and abundant hard-rockin’ energy is so intriguing and compelling.

Vocalist Becca Macintyre is a great find, possessing an idiosyncratic voice that easily switches gears from maniacal to melodic (“Born Young And Free”). She deftly navigates her bandmates’ power displays while retaining a human veneer (“Why Do You Hate Me,” “Move Shake Hide”) across songs that approximate everything you’ve loved about the Dillinger Escape Plan and Paramore, all strident, throat-shearing and exciting. Her sibling bandmates—drummer Josh and guitarist Sam—as well as brothers Jack (guitar) and Will Bottomley (bass), are poised to plant the Union Jack on everything the scene practically invented. Forget the old adage of “building a better mousetrap”; the quintet are building better explosives involving power-tech breakdowns (“Particle,” “Vibetech”), quirky metallic Brit-pop (“Weird And Wonderful”), prog-style respites (“Cry”) and reinvented power ballads. On the gorgeous, Deftones-esque “Back To You,” the band apply heft and decibels behind Becca’s melodic and glorious performance, one that will remind you how you felt every time you lost someone special, and how that space in your life will never be filled again.

Marmozets are barely old enough to legally drink in America; imagine the next-level excitement they’ll deliver in the coming years. Right now though, you need to embrace this band. Because every revolution needs its heroes, regardless of their passport of origin.