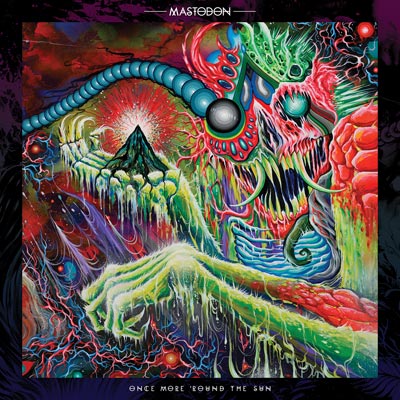 Once More ’Round The Sun

For all the rave reviews that Mastodon’s 2011 album The Hunter snapped up, even their most ardent fans had to own up to the fact that there was something amiss with it. Maybe it was something to do with the Atlanta quartet aligning with Mike Elizondo, a producer better known for his work with hip-hop acts (Dr. Dre, Eminem) and pop stars (Carrie Underwood, Maroon 5) than a prog-rock-inspired metal band. But mostly the LP, for all its power, felt like Mastodon were easing off the gas pedal at exactly the wrong time. Give a healthy note of credit then to Nick Raskulinecz, a studio vet whose resume is littered with amazing work, including helping return Rush to a new level of creative prominence on their last two albums. In other words, the exact perfect man to help Mastodon sharpen their fangs and claws.

The directness that the band brought out on The Hunter is still very much a part of Once More ’Round The Sun’s playbook. They waste little time getting into the meat of a song, and have almost entirely ceased going off on unnecessarily discursive passages. Those that do meander do so briefly (the small coda on “Chimes At Midnight”) or with maximum impact in mind as on “Diamond In The Witch House,” the stirring collaboration with Neurosis’ Scott Kelly that closes out the album.

Raskulinecz helps bring the punch back to these songs. Drummer Brann Dailor is given a prominent role; his tom rolls dancing around the stereo field and his double kick-drum work storming through like a tank. The guitars, too, are balanced perfectly, with both six and four stringers melding together in the mix while still staying very much identifiable. This allows the band to play with effects to color in the edges of these 11 songs. Strangely, they only seem to feel comfortable using these small bits of weirdness in the bridge sections of songs or as they are speeding towards the end. They tend to be bits of synth wows used to complement the shift in guitar tones. But other times, as on “Aunt Lisa,” they clutter it up further with fellow Atlantans the Coathangers providing a cheerleader-style female chorus. (A nod to Faith No More’s “Be Aggressive,” perhaps?)

What glosses over those small, weird choices is the collective strength and sense of purpose found here. It’s the kind of place where a band who are six albums and 14 years deep into a career should be. Bless Raskulinecz and Mastodon for staying on target and giving home for another decade-plus of amazing work like this.

“Once More ’Round The Sun”