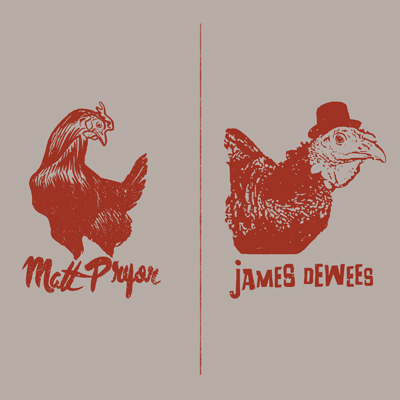 Matt Pryor and James Dewees are no strangers to each other—in addition to being a touring/ancillary member of My Chemical Romance circa The Black Parade until their 2013 demise, Dewees has been playing keyboards in the Get Up Kids since 1999. Although the pair toured together recently, this is the first time they’ve collaborated under their own names. It’s only three songs, but this this self-titled EP covers a vast amount of ground—presumably the result of the pair’s impressively large resumé (in addition to co-fronting the Get Up Kids, Pryor has been ever-prolific with his solo work and his side project, the New Amsterdams, while Dewees has been readying the new album by the ever-insane Reggie And The Full Effect and working with My Chem guitarist Frank Iero as a new duo, Death Spells). Which means that in just eight minutes, this EP offers a wealth of disparate sounds, held together only by Pryor’s distinctive vocals. First track “I Can be So Cold” is driven by a rush of fuzzy guitars and what, oddly, could double up as a hip-hop piano beat, a grim, dark, skewed pop song that’s (deliberately) almost beautiful and which could have easily sat on the last Get Up Kids full-length. Which makes it even stranger that the next song, “Failing You,” is a two-minute rush of emotional energy that could easily have been on the Kids’ seminal Something To Write Home About album. That, in turn, is entirely different to “Peculiar”—a song constructed out of a cyclical loop that starts off as a lullaby-esque whisper before building into a crescendo of atmospheric sound, ending the EP in a wash of ebbing, elegiac regret. Wildly varied as they are, each song leaves you wanting more just like it. Were this part of an album, that might not work, but as three, short, sharp jolts to the synapses, it does wonders. So go put it on repeat and confuse yourself. It’s worth it.