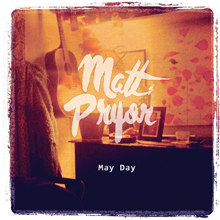 Putting it mildly, there are some really “interesting” projects folks try to get funded via Kickstarter. But what makes the site/mechanism so compelling is that for all the countless deluded nutbars out there looking to finance pillow art, books about their cat or edible drinking cups, every now and again true art is supported, at a time when artists need it most. Kickstarter actually made the new Matt Pryor solo record, May Day, happen, and it’s pretty clear that everyone who bucked up certainly contributed their dollars wisely.

Pryor has certainly been busy over the last decade: Between his main gig as front man for emo godfathers the Get Up Kids and longstanding side band the New Amsterdams, plus children’s music project the Terrible Twos and now May Day, his second true solo release, Pryor sports a discography well into the double digits. Over time and accrued experience though, he’s retreated somewhat back into the DIY world where he started; in addition to the Kickstarter aspect, he also launched his own label, Nightshoes Syndicate, specifically for the May Day release. The only difference these days is Pryor generally favors an acoustic or banjo to an overdriven electric guitar.

Subtle, mature arrangements give May Day a stripped-down, blessedly intimate feel, with some important sonic embellishments in all the right places. The tinny cluck of Pryor’s beloved banjo provides a soft percussive rhythm to “Unhappy Is The Only Happy That You’ll Ever Be,” and poignant closer “What My Tired Eyes Would View,” while “Like A Professional” juxtaposes swelling organ pulses over naked acoustic guitar. Even though the record is almost entirely devoid of drums, Pryor still provides thick, meaty moments, too: On “Your New Favorite,” rich piano and harmonica supplement the strumming. May Day is a perfect example of less being more.

Of course, Pryor’s work always hinges greatly on his considerable abilities as a songwriter and lyricist, and here, too, May Day lives up to its pedigree. Like his solo debut, Confidence Man, May Day offers a remarkably personal look into Pryor’s psyche. Whether he’s dusting himself off and thumbing his nose at others (“Don’t Let The Bastards Get You Down”), wailing almost desperately amid deep inner reflection (“Polish The Broken Glass”) or scorning a past lover (“As If I Could Fall In Love Again”), he does it with all the wit and nuance that has made Pryor one of the great modern troubadours.

So thank you, Kickstarter. While that “Grilled Cheesus” sandwich press was a true clunker (and a tad blasphemous), May Day is definitely a keeper.