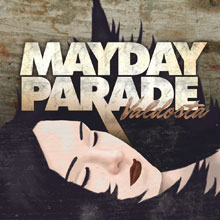 Mayday Parade have a ton to prove with their next full-length, and pretty much everyone from singer/pianist Derek Sanders to your grandmother knows it. It still all boils down to the ever-present 500-pound gorilla in the room—whether the Tallahassee, Florida pop-punk five-piece have any creative juice without original singer/guitarist/songwriter Jason Lancaster (now with Go Radio)—and if one judged solely from 2009’s Anywhere But Here, MP’s sophomore album and first without Lancaster, the answer from many fans would be no.

Thankfully for MP, their debut—2007’s A Lesson In Romantics (which Lancaster contributed heavily to)—was so good, the band can ride on those fumes some more, and will get another shot at redemption. Until then, the group have the fiscal sense to milk their present buzz and delay their reckoning a little longer by pumping out the six-song EP Valdosta, featuring two new tracks and four acoustic versions of previously released material. It’s little more than a sweet, safe snack for fans, so if you’re waiting for this record to answer any of the burning questions mentioned above, keep waiting.

In fairness, that’s not to say Valdosta doesn’t have its merits. New tracks “Amber Lynn” and “Terrible Things” are certainly solid; the former rolls by like a smooth stretch of highway, with folk-country guitars, pedal steel and strings, while the latter continues MP’s penchant for overblown piano ballads, without evoking the gag reflex. The band also sound great throughout—Sanders especially shines, hitting the tough notes with plenty of fire and clarity—and the alternate takes of Anywhere tracks “Kids In Love” and “Bruised And Scarred” are arguably better than the originals.

The main failing is with the older, Lancaster-era material (”Jamie All Over” and “Your Song”), which kinda come off like high-quality karaoke. Sanders nails his parts, but drummer Jake Bundrick and bassist Jeremy Lenzo sound fairly comical trying to replicate Lancaster; it’s a tall order and just isn’t going to happen, barring another lineup change. You also have to wonder why Mayday would continue to peddle songs largely written by an ex-member; for diehards, something just feels wrong about listening to “Your Song” without Lancaster singing it, and he’d undoubtedly have done a far better job with the same remake, so it’s really superfluous. Sure, anyone objective can understand the need to play old material live for fans, but re-recording it? It seems like a line is being crossed, and it’s tough to get past it as an informed listener.

So the jury is still out on the future of Mayday Parade, but until the band release another full-length, Valdosta is all we’ve got to go on—but it’s not a dark omen by any means. If the band can write more material as good as these two new cuts, and can increasingly stand on their own creations, there might just be a reason to listen to the next MP record. If not, the Lancaster karaoke will eventually run its course.