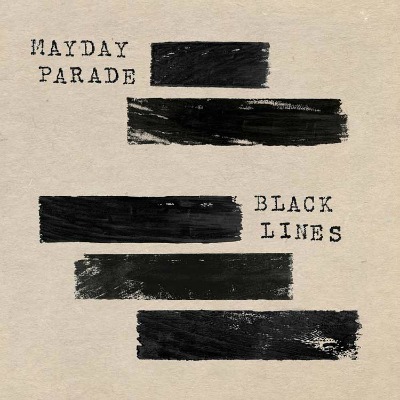 Hypothetical situation: your band is a machine that cranks out sweetly romantic power-pop with robotic precision and consistency. Each of your last two outings — both assembled from the same formulaic blend of perky rockers and swoon-inducing ballads that have become your calling card — has debuted stronger than the one prior. With the most recent, you scored your first Top 10 album. Now, it’s time to record a new record. Okay, hotshot: What do you do?

If you’re Mayday Parade, you lob a bomb into the gears, giddily watch it blow up and then build the best album of your career from the rubble. It’s a bomb you can actually hear exploding as Black Lines opens, a series of concussion waves blasting forth from Jake Bundrick’s drum kit while vocalist Derek Sanders snarls “I don’t know, man / I think I’m starting to feel” in a shockingly gnarly outburst of emotion. It’s bracing, passionate and bewildering — and if it weren’t for the massive, catchy chorus that follows, it wouldn’t be identifiable as Mayday Parade at all. The track (which also sports a cameo from Real Friends’ Dan Lambton) is titled “One Of Them Will Destroy The Other,” but by the time the second verse begins, it’s clear the destruction has already been wrought.

From there, all that’s left to do is survey the damage, a scattered archipelago of ragged, smoldering metallic chunks and cleanly sheared struts. Clearly benefitting from the guidance of producer Mike Sapone, Black Lines is grittier, dirtier and more muscular than anything Mayday Parade have attempted before — for the first time, the band sound truly fearless. Better still, their gambles pay off over and over; for an album this experimental (at least in Mayday terms), it’s shocking just how much of this stuff works.

That willingness to go there manifests itself in the strongest songs of Mayday Parade’s career. “Let’s Be Honest” leans on the Stone Temple Pilots riff (trust me, you know the one) to shift a lithe, propulsive rocker into overdrive and push Sanders to a throat-shredding yowl. “Underneath The Tide” discovers the fertile nexus of Jimmy Eat World and Balance And Composure. The strongest of all is the jagged “Hollow.” Driven by a raw, loping bassline cribbed from the early-90’s playbook, the track eschews a chorus for churning guitars, a sky-scouring solo from guitarist Alex Garcia and a series of false endings. Even the ballads are inspired — the slow-burning “Letting Go” builds from acoustic guitars and airy falsetto to a gorgeous, warm sonic sunburst.

Above anything else, Black Lines marks a new, uncompromising beginning for Mayday Parade. Freed from their past, the band seem free to do damned near anything next. The only certainty: it won’t be predictable.