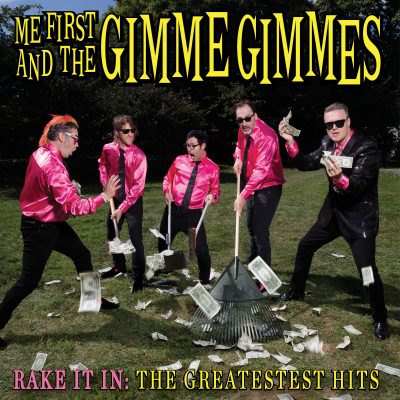 Rake It In: The Greatest Hits

FILE UNDER: The greatest of greatest hits

WHAT'S DIFFERENT: Being a culling of selections from the vast library of covers the Gimmes have under their (garter) belts, nothing’s really different. Though, if you’ve never heard the good time that can be had punk-ing up classics from the worlds of country, Broadway, pop, R&B, folk and other genres, this is a good place to get your smile on. See if you can hear where snippets of other punk songs have been included!

WHY YOU SHOULD CARE: It’s always been debatable whether the title of World’s Greatest Cover Band goes to the Gimmes or Metallica, with the caveat being that Spike Slawson and his charges are nothing but a cover band. Since 1995, they’ve been rearranging music history and making it easier for punk fans to relate to friends and parents. Rake It In highlights how much fun offering an olive branch to other genres has been. Yeah!