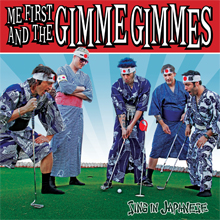 Maintaining their recent penchant for themed EPs based around tours as opposed to overwrought full-lengths, ultimate punk-rock cover band Me First And The Gimme Gimmes stretch out a little with this latest six-song stint, tackling some truly foreign material. As its title spells out, Sing In Japanese finds the quintet covering Japanese tunes by acts such as the Tigers, the Blue Hearts and Tulip with their inimitable punk-rock flair. As a listener, having no foundation with these bands means very little however, because once the Gimme Gimmes’ bouncy, mid-’90s pop-punk rock takes hold, even the most alien of songs sounds very familiar. In fact, it's somewhat of a bonus, given that we have no bearings to compare against, thereby making every one of these 16 minutes invigoratingly light and new. Aside from the obligatory winks such as aping Social Distortion's “Story Of My Life” during Takuro Yoshida's “Kekkon Shiyoyo,” Sing In Japanese is an entirely fun, familiar and bold venture. Sure, there are absolutely no surprises (other than hearing vocalist Spike Slawson nail the lingo so well) but this time around, the band have found just enough of a twist to breathe life back into a one-trick pony who were in danger of turning into an old, grey mare.