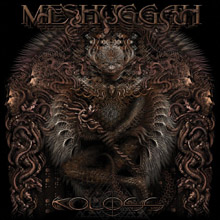 Those that have followed Swedish extreme-metal band Meshuggah’s career will no doubt be enthralled by their latest opus, Koloss. It’s every bit as epic, heavy and serpentine as the other albums in their swelling discography. The trouble is, not much sets this new album apart from their career benchmarks, like 2002’s Nothing or 1998’s Chaosphere. The eight-string guitars are still downtuned, the drummer still sounds like he’s stuck on spin cycle and the vocals are as plodding and oppressive sounding as always. Koloss will not disappoint metal fans that enjoy such things. In fact, we could see a Meshuggah diehard pointing to some of these polyrhythmic offerings (“Break Those Bones Whose Sinews Gave It Motion,” “Marrow”) and being able to prove, without a doubt, that new ideas are still percolating within the band. Looking for a simple headbang? This probably isn’t the place to find it, unless someone out there has mastered the robot-dance/headbang combo. “The Hurt That Finds You First,” with its speedy thrash, is the only track that breaks free of the rest of the album’s machine-like tempo. Then it’s over, and it’s back to that midtempo, snake-like groove. Still one of the most important bands in metal, at this point Meshuggah would do well to stop endlessly obsessing over intellectual musicality and write something that will stick in our craw a little more. Heck, maybe even a song with a chorus someday?

“The Hurt That Finds You First”