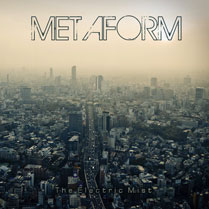 Los Angeles-born producer Justice Aaron made quite a splash with his 2008 debut as Metaform, Standing On The Shoulders Of Giants. The disc earned him comparisons to progressive-electronica heavyweights like DJ Shadow and RJD2. Like those artists, he opted to shake things up when it came time for a follow up.The Electric Mist goes beyond instrumental hip-hop, ditching the organic samples for guitars, fuzzy synths and drum machines. It’s also a departure because it features Aaron’s own singing on most of the songs. “Candy” and “Secretly Alone” are straight synth-pop, with their dancefloor beats, vocoder vocals and infectious melodies. For those unsure of the new approach, there’s “OCD” and “Introversion,” two instrumentals that recall the crate-digging magic of his previous release. Aaron smartly satisfies his fans with some familiar territory, while warming them up to a whole new world of sexy, yet dark dance music—the transition is executed well. It’d be hard to top his work on Giants, and Aaron doesn’t seem to be attempting such a feat. Instead, Mist stands in a category of its own, as a highly enjoyable electro effort.