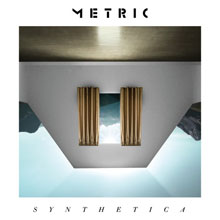 Metric’s genius is how they evolve from album to album, but never abandon their core strengths: zooming keyboards, pop hooks and frontwoman Emily Haines’ badass, angel-with-a-dark-side voice. The band’s fifth full-length, Synthetica, is no different. As its name implies, the album is heavy on electronic-sounding elements—guitars are pushed to the background, and the rock-based aggression of 2005’s Live It Out and 2009’s Fantasies is noticeably absent. However, there’s still bite: The album’s first lyric is, “I’m just as fucked up as they say”; “Youth Without Youth” features brash, glammy beats; and the alien-invasion sounds of the elegant existential crisis “Dreams So Real” are created by a vintage organ manipulated by a pedal. But Synthetica is dominated by airy synthpop confections (the Killers-like “Breathing Underwater” and “The Wanderlust,” the latter of which boasts a guest vocal from Lou Reed) and chilly atmosphere (“Nothing But Time,” whose icy piano and lost-in-space desolation are affecting). It’s certainly a progression for Metric, but it’s an evolution whose emotional honesty—and sonic depth—are rewarding and affecting.