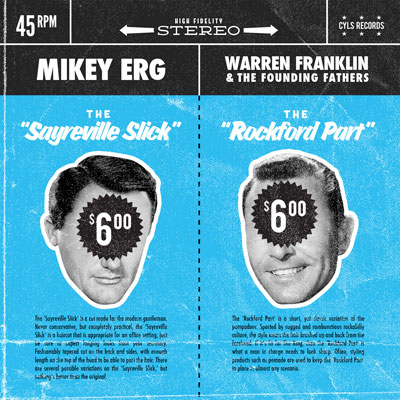 If you encounter the Mikey Erg / Warren Franklin & The Founding Fathers split EP without knowing what it is, you would be forgiven for thinking it is the work of one artist rather than two. Both share a penchant for inciteful power-pop with instantly familiar melodies akin to Elvis Costello and Ted Leo. The continuity is helped massively by the split’s premise—Erg and Franklin cover each other’s tunes and contribute two of their own. Costello is a reference point both musically and lyrically; “You’ve Never Heard My Aim Is True,” written by Franklin and covered here by Erg, plays the most famous album by world’s second most famous Elvis as a metaphor for alienation with a loved one. It’s a standout on an EP of standouts, narrowly edging out Franklin’s original contribution, the Superdrag-esque “See Him Again.” The differences between Erg and Franklin reveal themselves in time; Erg’s arrangements come off a bit heavier and Franklin’s voice has yelp in the same range that Erg has grit. This split is an excellent introduction to two exciting songwriters. Most importantly, it’s a hell of a lot of fun to listen to, especially on repeat.