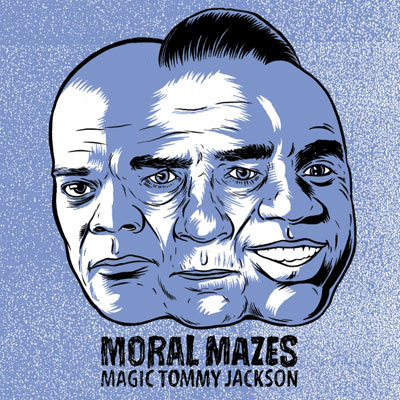 Any band featuring noted indie producer and former Jawbox guitarist/vocalist J. Robbins, as well as former Kerosene 454 drumming phenom Darren Zentek, will immediately raise some eyebrows for those who are familiar with the Dischord Records back catalog. The pair did it in 2011 with Office Of Future Plans, in which Robbins handled guitar and lead vocals (he's on bass here), and they’ve done it again with their new so-far studio project, Moral Mazes. Except this time, they’ve got former Far/Onelinedrawing vocalist/guitarist Jonah Matranga at the mic.

If this whole thing feels like a ’90s reunion, well, not entirely. Joined by guitarist Jeff Dean (All Eyes West/Dead Ending), the band kick off this two-song EP with the high-energy “The Long Way,” which features a more rocked-out Matranga, straining and screaming in a more urgent way than he ever did in Far. Featuring choppy little bass lines from Robbins, Dean’s fast-strums and even more frenetic than usual drumming from Zentek, the song seems fresher and newer than anything that could be considered throwback ‘90s.

The EP’s backside, “Stay Unprepared,” pays more homage to these guys’ former groups. Strangely enough, it has a Kerosene 454-style guitar buildup, and when complimented with Zentek’s post-hardcore bang and crash it becomes a time warp right back to 1998 when bands from Washington, D.C., and surrounding areas were stopping in every corner of North America, bringing their emotive, discordant, ebb and flow with them and dropping jaws along the way.

With Matranga’s more familiar, Far-style emo lilt back on the second track, this EP is both a look forward and back for some important players who thankfully haven’t stopped breaking new ground over the years.