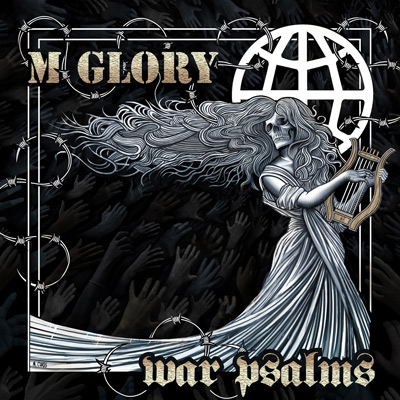 Morning Glory’s third full-length is like a fist in the air; a rallying cry for the kind of “revolution rock” that New York punk scene vet Ezra Kire talks about in the album’s second song, “Standard Issue.” As ambitious as the band’s brand of spruced-up punk has been over the years, War Psalms is actually more of a straight-ahead album from the Manhattan band, Kire leaving the faux-hawk grandiosity of 2012’s Poets Were My Heroes behind. Not to say that this is three-chord punk rock—far from it—but War Psalms benefits from a shorter running time (37 minutes) and a cohesive sound throughout.

Early songs like “Natas Behind Me” and “I Am A Machine Gun” sound like later-era Propagandhi and A Wilhelm Scream fed through a coarse, street-punk filter. Kire’s knack for unpredictable songwriting gives the album staying power without being too chaotic or all over the place. Rhythm-driven tracks like “Nationality Anthem,” which is basically a version of Green Day’s “Holiday” a crust punk would want to hear, sandwich nicely between the metal-tinged riffing of heavier numbers like “I Want Control” and the more melodic, piano-penned numbers such as “Punx Not Dead, I Am.” (In fact, Kire’s newfound love for tinkling the ivories is all over this album; even some of the songs that don’t feature him playing piano were written on the instrument.) “Know Your Wrongs,” a five-minute-plus opus that opens with a heartstring-pulling piano run and Kire’s spit-laden, impassioned vocals, shows what Morning Glory are capable of: big, rambunctious rock songs with two feet firmly planted in the underground. Not many bands can pull off a song like this without sounding like goofballs.

While we hope the eponymous cry-out in “War Dance” is a tribute to fellow New Yorkers and thrash metal legends Anthrax, who made the same rousing declaration in their song “Indians,” it’s more likely that Kire has tapped deep into the same infectious energy that the notorious ’90s mosh crew did. Because, after all, no matter what the style or genre of the music, it’s passion that drives its power, and War Psalms is brimming with it.