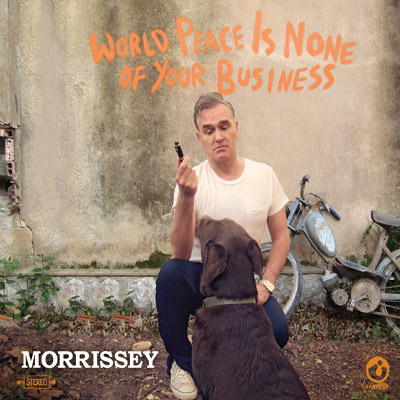 World Peace Is None Of Your Business

What do you want to hear from Mr. Stephen Patrick Morrissey on his first solo effort in five years? An acidic “fuck you” to a newlywed? Maybe a bit of half-hearted Beat poetry that speaks of “babies full of rabies” and a “tyke full of grippe”? Or how about an overwhelmed student bowing under the pressure and tossing herself down a set of stairs? All that and more is here for you on World Peace Is None Of Your Business, a strange, cumbersome and often entertaining beast of an album that is likely to be the dourest LP released in 2014.

The grim spirit that hovers above many of these songs is especially disappointing as this is one of the most musically ambitious projects Morrissey has attached his name to in some time. With the help of producer Joe Chiccarelli, his longtime band swings for the fences on each track. They add a Latin flair to the smoldering rock of “Kick The Bride Down The Aisle,” burn molten-steel hot with fuzzed-out electronics on “Neal Casady Drops Dead” and give off a Viva Hate-like glisten to back their bosses’ sob story of “Staircase At The University.” As ever, it’s the mood of that last track where World Peace works best, with Morrissey’s moping fiction being countered by jaunty and spirited Britpop. So even though we cringe at the idea of the poor schoolgirl “splitting her head open three ways,” we’re dancing as we do so. The same goes for one of the album’s strongest moments, “Istanbul,” a surprisingly moving story of a father searching for his son in the titular city to the tune of some roiling glam rock.

Into the midst of this fray, Morrissey drops one of his most romantic sentiments: “Kiss Me A Lot,” a track that, at the beginning of his solo career, would have been the centerpiece of a teenage mix tape. With Spanish guitar strumming madly in the background, the 55-year-old expresses some hormone-mad directives (“Kiss me all over the place/Kiss me a lot…but when you’ve kissed me/Kiss me all over again”). Still, World Peace is a frustrating experience, moving too quickly between temperaments and overstaying its welcome by a good 20 minutes. It features some of his most eye-rolling lyrics (the entirety of “I'm Not A Man”) sitting closely by very finely tuned observations and sharp narratives. But being a fan of Morrissey means taking the rough with the smooth, the frustrating with the jubilant. The more the world changes, the more he stays the same.