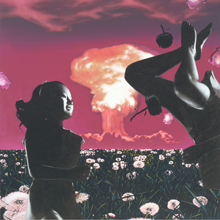 This split between a pair of reliable, enjoyable Virginia acts has been in the works for more than a year, but is only now seeing a proper release. It's a platter of sonic, creative fury that's mostly worth the wait.

Mouthbreather are up first, and unfortunately, it's their farewell material. The band provide the two-minute grab-and-go “I Can't Dance To That” before injecting the longer “Sea Of Storms” with layers of intertwining guitars and similarly fierce, raspy vocals. Go halfway between Hot Snakes' pensive snarl and the riffy post-hardcore punk of Dear Tonight, and that's where Mouthbreather's final one-two punch lies.

Worn In Red take a similar structural approach with their two contributions. “The Alarmist” sets up an impressively tense mood considering it clocks in at under two minutes, and “The Power Of Nightmares” is just a few decibels short of chilling, like Glass And Ashes with a little more patience and a few more effects pedals. Like their 2009 full-length In The Offing, Worn In Red wield ’90s screamo influences, but instead of that style's sordid chaos, the band adopt a taut, deliberate momentum. There's greater contrast than Mouthbreather in their whiskey-shot yelling and dark, murmuring guitar twinkles, and it makes for an even better finish than their friends' already solid start.

Worn In Red’s “The Power Of Nightmares”