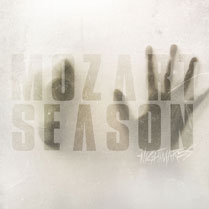 Mozart Season’s Equal Vision debut is a hodge-podge of old and new, teaming three songs from their previous EP, the self-released Apotheosis, with three brand new tracks. The re-released tracks highlight what this Sacramento, California, band have become known for—alternating screamed and sung vocals, ambitious guitar licks with solid riffing, and urgent (if not slightly cliché) lyrics (“Ankle Deep Ocean,” in particular, feels way too obvious). The new tracks, especially the throttle-heavy “Rage Factor 11,” head more in a hardcore direction, similar to Comeback Kid’s more melodic moments. And the lyrics on the new material feel less forced, perhaps a sign of oncoming maturity from a band who surely have a very bright future in the world of fluffy metalcore. An obvious reference point is Dance Gavin Dance; Mozart Season sound eerily similar to their Sacramento scenemates. Together, these two bands are spearheading a regional scene that’s palatable enough for a mainstream audience, but just harsh enough to keep their key fanbase stoked.