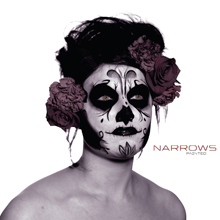 Narrows are a collaboration between former members of Botch, These Arms Are Snakes, Unbroken and Some Girls. They took the metalcore formula and churned in some Swans-like darkwave, art rock, British shoegaze and ambient noise on their debut album, 2009’s New Distances. But on Painted, they don’t think quite so hard; instead, Narrows use their instinctual gut-bile to craft tunes such as “”It’s The Water,”” which is just over two minutes of distorted bass, spacey guitars and a mid-song slide-guitar refrain that’s out of this world. Sure, there are longer songs on here—the eight-plus minutes of “Greenland” meander a bit too much, actually—but by that point, they’ve already hit us with “Absolute Betrayer,” a downright unsettling bit of gothy riff-core and “TB Positive,” which kind of sounds like caged animals being dropped out of a plane.

It should be said that vocalist Dave Verellen is arguably the best vocalist of the metalcore genre, but on Painted, he’s able to temper his lion-like bellow with odd yelps and the random touch of melody. (Those with normal vocal cords would not be able to pull off the harrowing opening scream-ramble of “Face Paint.”) Verellen is a beast, that’s established, but everyone here is completely amped up. The guitar work by Ryan Frederiksen (ex-These Arms Are Snakes) and Jodie Cox (ex-Bullet Union) is unrelenting and inventive. Bassist Rob Moran (ex-Some Girls/Unbroken) should put in a patent request for his crunchy, distorted bass sound. And put drummer Sam Stothers (ex-Makeout Boys) in a mentorship program with heavy hitters such as Dave Grohl and Bill Ward ASAP, because this guy has machines for arms.

One warning: Don’t listen to Painted late at night while lying in bed with the lights out. It will come at you like a demented fever dream, and you’d be better off just re-watching the unspeakable scenes in that terrifying horror movie that scarred you for life as a child. Heed our words: Painted is some seriously scary rock music.