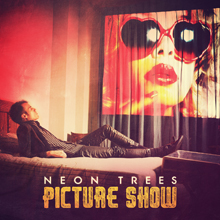 “I’m sick of people saying rock ’n’ roll is dead,” howls Neon Trees vocalist Tyler Glenn on “Teenage Sounds,” the second song on his band’s sophomore album, Picture Show. On its face, it’s a puzzling declaration, given that the band’s ubiquitous 2010 hit “Animal” sent them to the head of Top 40 programmers’ playlists due to its peppy pop charm. But the quartet never really fit with their radio dial peers; while “Animal” was blowing up, the group were instead opening tours for the likes of My Chemical Romance and the Killers. Indeed, Neon Trees owe more to ’80s new wave than anything from the new millennium, and that’s on display throughout the duration of Picture Show. The disc continues the Killers-meets-New Order sound the band employed on their debut album—from the soulful sass and hand claps of “Moving In The Dark” to the pulsating bass pattern on “Lessons In Love (All Day, All Night),” which mimics New Order’s “Bizarre Love Triangle” to a T. Elsewhere, “Mad Love” is as perfect a pop song as you’ll find these days, backed by sparkling synth runs, an 8-bit bassline and one of the catchiest choruses in quite some time.

In fact, nearly every track boasts a radio-ready chorus, and every detail’s been perfected with a fine-toothed comb. Ultimately, the album’s main fault is its resolute consistency, namely the fact that things basically run on one speed, and it gets repetitive quickly. But Picture Show is polished, preened and produced within an inch of its life, the one exception being “Teenage Sounds,” the most aggressive and, as a result, passionate number. Although “Still Young,” an ode to wide-eyed naïveté that will likely find its way to radio stardom, gives Picture Show’s backend a little life, fans looking for the disc’s best moments should stick to the first six tracks—with the exception of lead single “Everybody Talks,” which virtually apes “Animal” to the point of redundancy.

“Moving In The Dark”