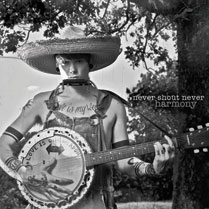 2010 has been kind of a big year for Christofer Drew. The most hated man in emo not only released his major-label debut under his Never Shout Never moniker, What Is Love?, back in January, just last month he dropped xALBUMx, the debut full-length from his jokey metalcore side project EATMEWHILEIMHOT!. Now, he's dropping his second NSN LP in eight months, and this time, it's a true full-length: Harmony is a whopping 11 tracks (practically a double album for this kid), yet it still clocks in at a speedy 27:12. (One day, Drew will break the 30-minute mark, we just know it.) Of course, quantity isn't always in line with quality, and dipping your toes into too many projects usually results in diminished returns.

Surprisingly, though, Drew sounds even stronger than he did on WIL?, turning in consistently better vocal performances that demonstrate a slight hint of (dare we say it) maturity while handling lyrical topics both serious (the acoustic, harmonica-assisted title track) and not-so-much (“CheaterCheaterBestFriendEater”). Drew's music is consistently breezy and poppy, with plenty of easily sung-along choruses (“This Shit Getz Old” is loaded with more “da-da-da”s than that Trio song), and the stuff that won over his early fans—cutsey love songs—are still present. But Drew explores more of his Beatles influence with “Lovesick,” a delicate, piano-led waltz where the mop-haired frontman pines for the return of an ex-flame. His trusty ukulele makes an appearance in the so-adorable-its-music-video-should-just-be-stock-footage-of-puppies-rolling-around “First Dance,” one of the disc's best moments.

But Drew isn't infallible. “I Love You More Than You Will Ever Know” is a slow,country-tinged ballad that you'll find yourself wanting to skip more often than not, and the back-to-back pairing of the unmemorable “Lousy Truth” and the derivative “Trampoline” practically stop the record dead in its tracks. Luckily, Drew saved the best for last with the Rhett Miller-ish “Sweet Perfection” and the surprisingly vengeful “Sellout,” where the singer spits lyrical barbs like “You got a problem with the way I think?/I got a problem with the way you think you can program me like a damned machine/I'm gonna take a stand and say, 'Fuck this scene,'” and “I know that I should be the last one to speak about this/But even sellouts have their dreams,” before summing up his disgust with the classic haters-gonna-hate line, “All you punks back home, you can kiss my ass.” While the music backing Drew's fiery invective doesn't match his lyrics at all (it's more “da-da-da”s over top of a piano, shaker and acoustic guitar arrangement), it's still pretty awesome to see this guy stand up for himself—and write a pretty damn good song in the process.