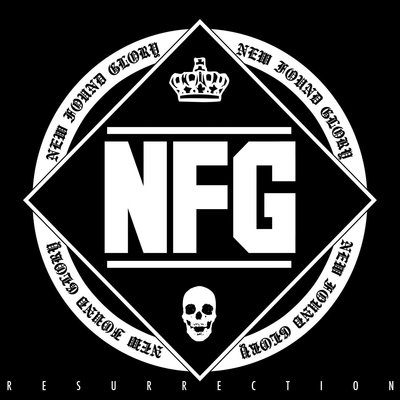 It’s an understatement to say a lot has changed in New Found Glory since they last released a new studio album in 2011. Clearly, the biggest trauma was that of guitarist and founding member Steve Klein being removed from the band after he was charged with multiple counts of lewd conduct with a minor. It should be noted that nearly a year after his initial arraignment and “not guilty” plea, Klein has not spent any time inside a jail cell nor has he been found guilty by a judge or jury; he continues to deny the allegations and fights to clear his name.

Klein has remained publicly silent on both his firing and his legal issues. However, the remaining members of New Found Glory—vocalist Jordan Pundik, guitarist Chad Gilbert, bassist Ian Grushka and drummer Cyrus Bolooki—have plenty of thoughts on the issue, and with Resurrection, they’re going to make sure you know them. The title track feels littered with insider references: “It’s just good to know that your breakdown has been put in its right place” could be a reference to a songwriting squabble in the practice space; “Criticized my mistakes/While you dug your own grave” could be a play off “Dig My Own Grave” from 2008’s Tip Of The Iceberg EP.

“The Worst Person” is a vicious assault on Klein’s character, with lyrics accusing the ex-guitarist of “hooking up with girls in Boston” and “[manipulating] situations and weak minds to feed all [his] desires,” before proclaiming in the chorus, “You might be the worst person I’ve ever met, I’ve ever known/You keep doing all that shit that you regret/End up alone.” More shots are fired Klein’s way in the album-closing “On My Own,” with Pundik leveling accusations such as, “I’d open doors, you’d close them” and “I’d have ideas, you’d claim them” before declaring in the chorus, “So I’ll erase your name/Start again… I’ll erase your name/And do it again on my own.” Clearly, NFG feel like they are better off without Klein in the band and are using Resurrection as a way to get their pent-up feelings out in the open; however, it’s tough to view these songs as little more than kicking someone when he’s down.

The album isn’t entirely about Klein, though; the back-to-back “Angel” and “Stubborn” are powerful, adult breakup songs; the latter in particular revisits Grushka’s mindset following his divorce (a topic that contributed to a lot of lyrics on Radiosurgery). The songs feel real, the pain palpable. Both are extremely memorable; it doesn’t hurt that the latter has a great guitar solo as well as a killer guest vocal from Bayside’s Anthony Raneri. “Persistent” also taps into the feelings behind a failing relationship with an instantly memorable sing-along chorus. These heartbreak-inspired songs feel more melancholy than bitter, like the Klein-based material; as such, they’re a little easier to swallow.

Musically, Resurrection is a big throwback to the early 2000s, with muscular riffs and effortlessly catchy leads courtesy of Gilbert (the quick, string-bending lead he throws into “One More Round” is the kind of guitar part you wish were 10 times as long). The band made the conscious decision to move forward as a four-piece, and the record reflects that; if Gilbert is playing a lead or solo, there’s nothing below him in the mix but bass and drums. This strips down the songs to their melodic bases, making a lot of the arrangements feel basic—that shouldn’t be taken as a negative, though. “Vicious Love” is a chugging pop-punk number with a riff that you can sing along to from the first time you hear it, and the band let Grushka’s bass carry the song through its quieter moments, too. Writing for one guitar after spending nearly 20 years writing for two could be a recipe for failure, but NFG figure it out pretty well on Resurrection.

The struggle that many longtime NFG fans will probably have to go through with Resurrection is coming to grips with why they like New Found Glory. If you’re a fan of riffs, breakdowns and the occasional injection of the forbidden beat, there’s plenty to love here. If you’re a fan of their lyrics, Resurrection could be a challenge to accept. While individual songwriting credits have never been available throughout NFG’s career, Klein had always been identified as the group’s primary lyricist, with Gilbert responsible for much of the music. Obviously being in a band is generally a collaborative experience, with each member contributing to lyrics and music whenever appropriate; no one’s saying Klein wrote 100 percent of NFG lyrics before now. But one of the biggest reasons NFG connected with thousands of people worldwide was his ability to confess whatever his sins may have been at the time in the context of a three-minute pop-punk song, making the band more vulnerable and human in a scene that is typically dominated by snotty, don’t-give-a-fuck attitudes. The lyrics on Resurrection are different; whoever wrote them (it’s a fair assumption Gilbert did much of the heavy lifting) doesn’t try to impersonate Klein’s writing voice, instead pushing their own voice forward. When it works, it’s great; when it doesn’t, it feels clunky at best and skippable at worst. As a result, Resurrection could be a contentious record in New Found Glory’s extensive discography, but on the plus side, you can probably expect another one in two years—so if this one’s not right for you, maybe the next one will be.