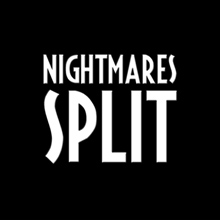 Nightmare Of You/Nightmares For A Week

Nightmare Of You and Nightmares For A Week share little in common besides a name association and New York residence. Their pairing on this split EP is certainly an oddball matchup, but music fans diverse enough to include post-punk alongside punk in their palette will enjoy it thoroughly.

Nightmare Of You resurfaced earlier this year after largely staying under the radar since 2009's decent but relatively forgettable sophomore effort, Infomaniac. Two digital singles signaled a return to form, and their pair of cuts on Nightmares continues to instill promise that the band are recapturing that something special on their excellent demos and 2005's glossy self-titled LP. The New Order-ish “It's Not Enough Until It's Killing Me” is a nice slice of dark pop with a lightly dancey beat, while “Box Of Hops” combines frontman Brandon Reilly's Smiths-y melodrama with a little twang and playful keyboards.

But then, Nightmares For A Week bust out of the gate with the shortest, fastest and meanest song in their small catalog: “2011,” a minute-long rager that wouldn't be out of place on a mid-era record by their neighbors to the north, the Sainte Catherines. Nightmares is all pretty good to this point, but then NFAW close it out with “Mr. Grimm,” which showcases everything outright great about the unfairly unheralded band—namely, their talented application of emotionally wounded yet melodic urgency. They may still sound like the best thing this side of a Lucero-inspired Something To Write Home About (with a brief riff transition reminiscent of Alkaline Trio and a lyrical reference to the Get Up Kids' spiritual brethren, the Casket Lottery), but when you're this good at it, there's no need to mess with what works.

Nightmares For A Week’s “Mr. Grimm”