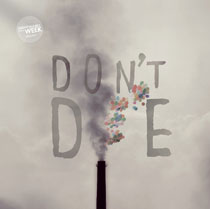 Nightmares For A Week

While the Get Up Kids have reunited to offer up a new full-length early next year, it’s highly unlikely a follow-up to Jawbreaker’s Dear You will ever materialize. Kingston, New York’s Nightmares For A Week try to soften that everlasting blow of uncertainty with their well-crafted debut LP, Don’t Die.

Don’t Dieis certainly a logical extension of the band’s powerful debut EP, A Flood Tomorrow, continuing to meld the melodic, personality-fractured jangle of TGUK with Jawbreaker’s shot vocals and crunchy guitars. But it’s a lot less heartbreaking and less indebted to the fantastically integrated twinge of alt-country that underlined their previous songs so well to give them extra resonance. Still, while Don’t Die is more easygoing than its pleading title suggests, it’s a smooth and solid proper start for the band.

Opener “You Destroy Me” does actually up the folk factor, acting as a subtle acoustic introduction to the album’s otherwise energetic and bustling tilt. The latter really starts when “Baby” busts through next, with guitarist Bill Manley and bassist Sean-Paul Pillsworth firing raspy vocal trade-offs in expert fashion and nipping riffs from “Do You Still Hate Me?” It’s cool, though, because they settle into a slightly more original amble for the rest of Don’t Die‘s course. It’s one that tends to typify a sense of slightly drunken, modest celebration despite oneâ€˜s flaws (“Old House”), or surprisingly enlivenedâ€”though haltedâ€”emotional desperation (“Bear Mtn.”).

Still, something about Don’t Die feels a tad stunted, but that’s not to totally decry Nightmares For A Week’s first full-length; its title’s a request we sincerely hope the band abide by for some time.