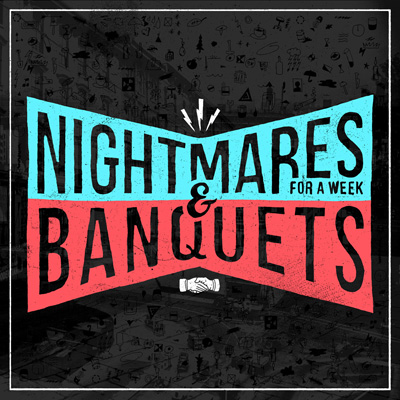 The days of split full-lengths between melodic punk bands seem like a lost relic since BYO Records closed their excellent series with Alkaline Trio and One Man Army in 2004. This long-player that features five tracks apiece from Nightmares For A Week and Banquets might be good enough to revive it on merit alone.

Although Nightmares For A Week have been mixing in tinges of folk and alt-country with the inviting, emotive raspiness of the Get Up Kids for some time now, there's something about their side of this split that feels a little more unique than usual. Though the heaviness of previous lyrical themes of alcoholism and rugged perseverance through stagnation remain, they sound overall more emotionally measured, while stirring in tinges of wistful jangle-pop subtly reminiscent of Gin Blossoms or R.E.M., even finishing their side with an upbeat, Appalachian folk-styled instrumental. Despite the abrupt shifts in energy and momentum from track to track, the songwriting is strong and bears some of their best hooks to date (“Bleached Blonde” and especially opener “Canadian Tuxedo”), making for a varied and reliably solid half.

This isn't Banquets' first rodeo either, with two prior full-lengths and a couple EPs under their belt. They have the added pressure of following up their unquestionably best release, last year's self-titled LP, and definitely live up to it with this concise blast of material. There's always been a quiet undercurrent of stadium-sized musical ambition to their music, and “The Engineer” is practically a “holy shit” culmination of that, with enormous guitars and sonic layers multiple enough to make Dave Grohl nod in approval; though it isn't even two minutes long, it feels like Banquets going for and succeeding at something bigger than ever. It segues into the urgent, dynamically paced “My Moped Year” with slick confidence, followed by a strong pair of tracks to shut the whole thing down. Banquets spent a couple releases providing a “nice,” increasingly improving reminder of what it felt like to watch the Gaslight Anthem back in the day at your local dive; this split, however, is where they truly sound like they're breaking out of that shell in more than one way.

Both Nightmares For A Week and Banquets fall roughly under that “melodic punk” banner, but with clearly distinctive characteristics that prevents this split from any stylistic redundancy. With the added benefit of quality material from one underappreciated band and a near-watershed moment for the other, listeners get plenty of bang for their buck.

Nightmares For A Week’s “Canadian Tuxedo”