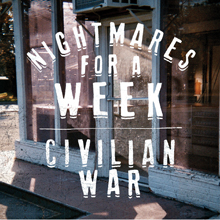 Nightmares For A Week

Nightmares For A Week's debut, 2009's A Flood Tomorrow, was created with the sort of beginners' brilliance upstate New York punk simply seems to be blessed with lately. Like Polar Bear Club's The Redder, The Better, or Such Gold's Stand Tall, it was an EP that should have kickstarted a storied rise through the melodic punk trenches. But for these ex-members of short-lived prog-emo outfit Anadivine, catching some attention appears hard-fought. Chalk it up to limited touring engagements, or a label (Academy Fight Song) that went dark not long after issuing NFAW's first full-length, 2010's solid if not slightly retrogressive Don't Die. If their sophomore LP, the excellent Civilian War, doesn't propel them to at least some sort of deservedly greater stage, who knows what will.

Civilian War shows that much can change even when a lot hasn't: The band remain indebted to the endearing proclivities of forbears like the Get Up Kids (the delicate “Vet” sounds like late-period Replacements filtered through a TGUK ballad) and Attack In Black ca. Marriage (“We'll Do Our Worst, Lord” and the bridges of “Bloodshot Monday” and “The Destroyers” cop AIB's playful guitar tone, otherwise adding tasteful Hammond organ as if they were the Wallflowers), but just like those bands, they're also progressing nicely. More eclectic instrumentation colors their songs, from the R.E.M.-iniscent mandolin riff that helps usher in opener “Down In The Streets” to the aforementioned Hammond. Both make things decidedly more bustling at times without actually pushing the band into full-on alt-country territory, in part because the band dip into so many different styles. “Dead Men” jumps out with its snarling pirate vibes, but gives way for a subtly psychedelic, pretty bridge, while “Red Eyes” wields energetic folk-punk tinges with a reflective, emotional resonance. If the front half sprawls a little too much for you, the more straightforward, one-two opening punch of Side B's “The Destroyers” and “Bloodshot Monday” will be a refreshing shot of adrenaline, while penultimate track “Let's Talk About Healing” sounds like the best aggressive song TGUK side project Blackpool Lights never wrote.

The album lives up to its namesake by focusing heavily on the weekend-warrior mentality of leisurely downtime with friends, where socially self-medicating and unabashed sing-alongs are times to live for. On paper, that might sound like Civilian War lacks depth, but interspersed with introspective looks at personal growth and self-acceptance, there's weight to the overall spectrum of themes. Civilian War is a deliberate act of progression for the Kingston, New York, trio, maintaining their general style while adding obviously thoughtful variations to their sound and songwriting. It's a rewarding listen for those have been paying attention all along, and should be a thrilling surprise for the hopefully large batch of newcomers just picking up on them now.