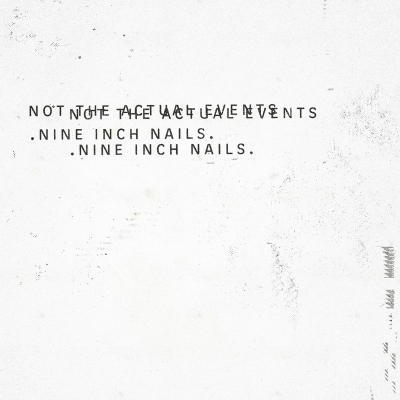 Not The Actual Events

Author William S. Burroughs once posited that, “A paranoid is someone who knows a little of what's going on.” Nine Inch Nails majordomo Trent Reznor has made a career embodying that premise in his aesthetic journeys into vulnerable electro-alt-rock, nihilist sonic evacuation, dead-inside minimalism, grating techno-fear and sophisticated film scores. But throughout all of these stylistic inversions, the one thing that makes NIN consistently compelling is that he never feels the need to sugarcoat things. And on Not The Actual Events, Reznor, creative partner Atticus Ross and longtime mixmaster Alan Moulder lay out the state of things. Did you hear? We’re fucked.

Reznor and Ross’ vistas of devastation and paranoia are as bleak as election results and as final as treating radiation poisoning with codeine and minutes. “Parts of me are slowing down and time is speeding up,” Reznor posits on the 107-second “Branches/Bones,” as he shears some throat lining on top of a buzzing guitar riff. It’s followed by “Dear World,” the best dance floor surveillance track this side of NIN’s 2007 Bush-era dystopia, Year Zero. The percolating electronics shore up Reznor’s knack for writing terrifyingly benign-sounding lines to convey the abject horror of fascism (“Everything is getting unfamiliar now”) before a computer-generated voice takes stock of everything humanity has done as of late (“Yes, everyone seems to be asleep”).

“She’s Gone Away” feels like plodding blues from the ninth circle of Hell, but it’s ambiguous about what “she” actually represents. “The Idea Of You” ranks up there with Reznor’s best songs, fueled by sinister, stalker-esque cellphone narratives, powered by mechanized guitar riffing and frantic electronics crashing into Dave Grohl’s frantic drum fills. The record culminates in “Burning Bright (Field On Fire),” a near-six-minute track that has Reznor adopting the persona of a street preacher bearing false witness while Godflesh cover Black Sabbath (it’s actually Jane’s Addiction’s six-stringed art-metal avatar Dave Navarro bringing the menace). Consider it a leak before the actual, finished sound of the end of the world.

Not The Actual Events is everything we would expect from Reznor and Ross, offering textures we’ve never visited and contexts with conscience. It’s also an ugly fucking thing, which means it should sidle up nicely alongside whatever optimism you might have for 2017.