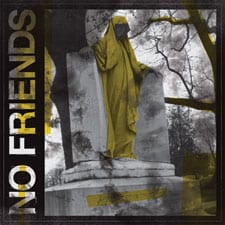 If you're bummed that last year's self-titled full-length debut from Richmond, Virginia, hardcore supergroup No Friends only clocked in at 20 minutes, don't fret: The band have nine more minutes of their charged, melody-tinged take on '80s hardcore available as a free download courtesy of Kiss Of Death Records–though that's if you don't want to commit to picking up the one-sided 12-inch version. Whichever you opt for, you get a solid six-pack of speedy hardcore-punk tunes with enough tempo changes and vocal versatility that makes it sound as fresh as it could have 25 years ago. Just don't expect a sonic leap forward from the full-length: Ex-New Mexican Disaster Squad guitarist Sam Johnson is still cribbing riffs from Brian Baker's playbook shamelessly while his fellow ex-NMDS bandmates, bassist Alex Goldfarb and drummer Richard Minino, round out a bash-and-roll rhythm section for good measure. Municipal Waste's Tony Foresta again fronts with his semi-serious, caustically enthusiastic shout that's about the same as it is in the Waste's songs. It's a traditional sound, for sure, but by no means failing.