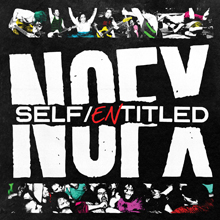 This review originally ran in AP 291.

It’s sort of expected that we’ll get a new NOFX album every three years (seriously, since 1997’s So Long And Thanks For All The Shoes it’s been like clockwork), and on it, there will be a bunch of decent-to-good songs, a few great ones and one or two downright terrible tracks. The nice thing is that in recent years, Fat Mike’s lyrics have gotten a shit-ton more personal, resulting in some truly powerful moments (see 2009’s “My Orphan Year”). Self Entitled benefits from his more honest lyricism, whether it’s about his broken-home upbringing (“I, Fatty”) or discussing his recent divorce by going through his downsized record collection (“I’ve Got One Jealous Again, Again,” featuring the poignant line, “I got the record player/But I didn’t get the house”). These moments make up for the more cringe-worthy “72 Hookers” (which is culturally insensitive and crude) and the extremely politically dated “Ronnie & Mags.”

“I’ve Got One Jealous Again, Again”