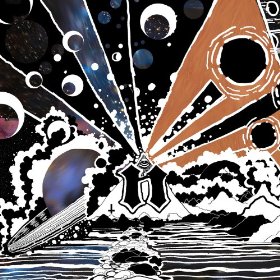 There’s good reason why bands like Russian Circles and Pelican are instrumental. Celestial post-rock-leaning metal is not a vocalist’s game. Kyle Hardy, the singer for Tucson, Arizona, quintet North, struggles to find his place on The Great Silence. His scruffy low screams, akin to Isis frontman Aaron Turner, work perfectly when the band push into heavier territory like the southern sludge track “Inanimate Fathers.” On the band’s calmer or more ambitious numbers, Hardy is sometimes a distraction but never a deal-breaker. If anything, North’s expert negotiation of dynamics and textures is interesting enough without a spokesman. The band excel at both sprawling atmospheres and righteous guitar-worshiping riffery, transitioning between the two at such a glacial pace that a track like “Sentience” morphs from Pink Floyd to the Melvins without a single disruptive second. Despite being an hour long, Silence is not fatiguing, stocked with lengthy tracks that forgo predictability. Three years since North’s well-received album Ruins, The Great Silence is the band’s most accomplished work to date.